Last monday, I went to a concert. Not your average gig, but a Steven Seagal concert. Yes, the actor. The man starred in numerous succesful actionflicks in the early 90’s but over te last 15 years, his career has faded. As his pshysique expanded, the budgets for his movies shrunk in an equally dramatical manner. Nevertheless, Seagal regained a strong following – including myself.

So between releasing direct-to-video actionmovies like they are wet farts, he’s currently trying various new ventures, like his reality cop show “Steven Seagal Lawman“. Meanwhile, he has been playing the guitar for most of his life, and released two albums in 2004 and 2006. The first one was a mix of at least 100 genres from pop to world music, and the second contained blues music exclusively. His European tour in 2014 is based on that second album. It’s blues. By Seagal. But how was it?

Before I get to that, we go back to 2006. Steven was playing some gigs with his band (then called “Thunderbox”) in Europe and he was scheduled to visit The Netherlands, in Zoetermeer (Cultuurpodium Boerderij). His appearance was canceled at the last minute because his record label had a dispute in France. So, since you can drive from Zoetermeer in The Netherlands to France in just a couple of hours, his label would not let him play here. What?!

Well, I know that a 3-hour drive is the average commuter distance in the USA, but in Europe that is really far. Not so much the distance measured in kilometers but measured in cultural difference. When you drive 3 hours, you get to a place that feels as distant from your bed as Cambodia would feel to someone from Los Angeles. But since most Americans think that Rome is the capital of Amsterdam… They can’t help it. Yes, I was angry back then.

So in May 2014, I was thrilled when I heard that another Seagal appearance was scheduled. Again, in Zoetermeer, same venue. Cultuurpodium Boederij (lit. culture stage “the farm”) is not particularly well known in the mainstream music scene, but I think in the world of smaller bands it’s the place to be. Looking at their website I recognise none of the names except for Lisa Stansfield – so it seems like a place for little-known niche bands or washed-up artists. It’s a nice, clean, modern place though. It feels newly built. I liked it.

I followed Steven Seagals tour on his Facebook page. It started in Eastern Europe and he worked his way to the West. From what I saw, most of the venues were pretty small with the exception of a music festival in Slovakia and a large concert hall in Belgrade. But the Sofia Live Club in Bulgaria on the other hand, looked like it could barely hold 100 people.

The Netherlands gig was somewhere in between. Steven was scheduled to play in the “Jupiler Zaal” (translated “Jupiler-hall”, Jupiler is a beer brand). That made it sound like they had multiple halls but actually, it’s the only hall in the building and their beer supplier made them put their name on it. The Jupiler Zaal can hold 750 people. Shortly after arriving, we heard that it was sold out. So there were 750 excited Seagalfans waiting.

I started off by buying this must-have T-shirt (and I am wearing it now while writing this). 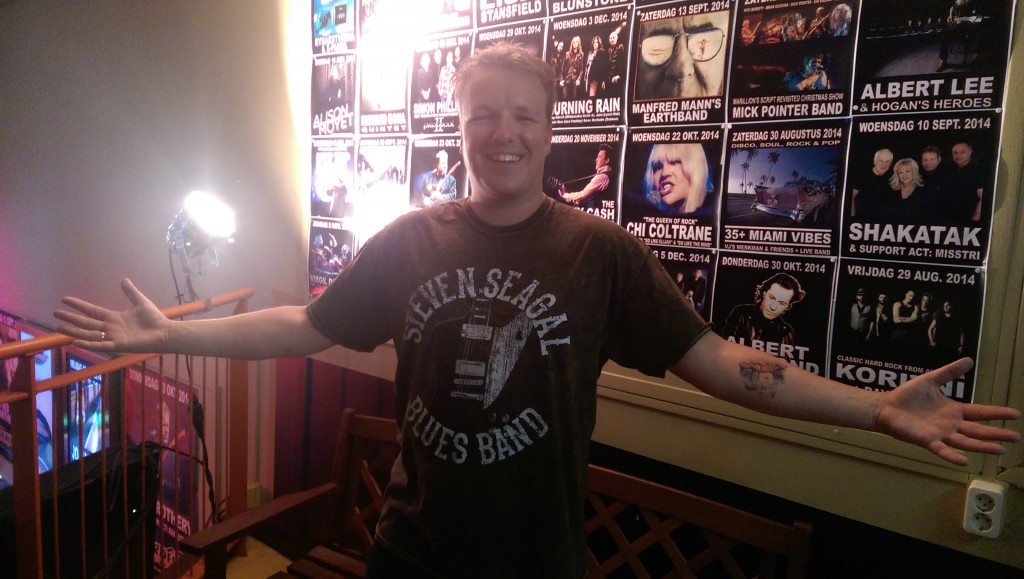 Then the band appeared and they performed an instrumental blues tune to warm up the crowd. After a couple of minutes, the man himself walked on stage, thanking the cheering crowd in his trademark “zen” way (hands put together flat, nodding, like praying buddhist style).

He looked like I expected: a strong stage presence, tall and bloated. Not as fat as he seemed to look in his last few films, but definitely out of shape. Well, he could probably still kill everyone in the room in less than 25 seconds using nothing more than his left thumb and a beer can… But anyway. He walked slowly, almost frail, as if he was afraid to trip over a wire. But nobody seemed to care. It was Steven Seagal! He was there! And we were in the same room with him! 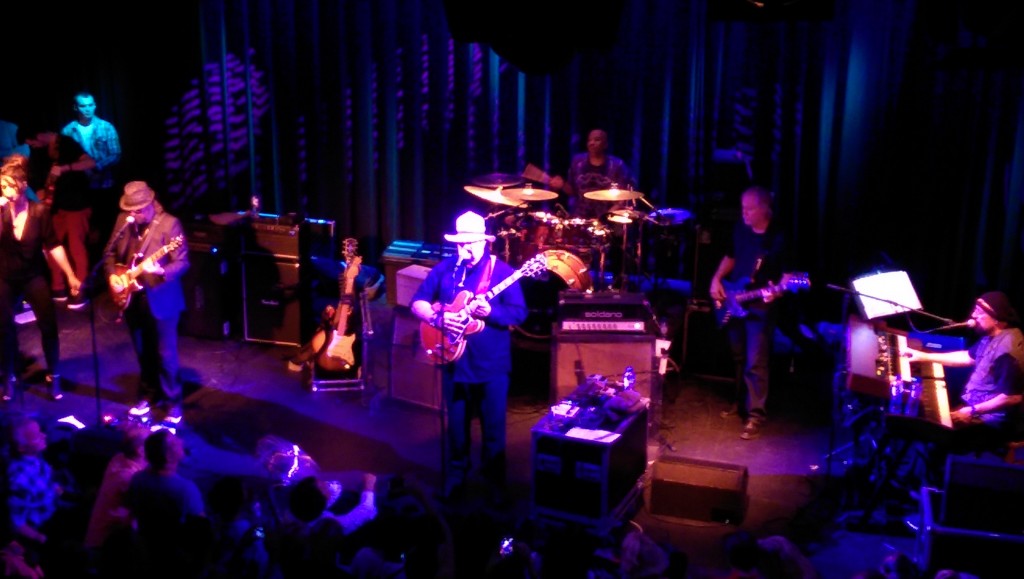 I watched the concert from a balcony. It was less crowded, with a good view on the entire stage and – important – a bar nearby. Unfortunately, from the balcony I could hardly tell if it was Steven Seagal performing or Jacques Herb (a campy Dutch singer). This is because Steven wore a white hat. And under the hat, he wore a bandana. I don’t know why he wore two pieces of headgear – maybe he is balding, or tired of dying his hair raven black. Who knows. I would have liked to see more of his face, though. 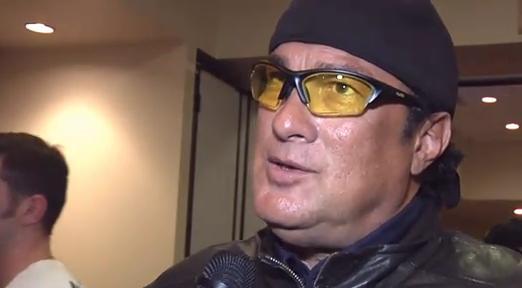 What was visible, was his raven-black (dyed?) goatee and some glasses that have grown into a Steven Seagal trademark apparel: the yellow-tinted gunman glasses. It’s like he replaced his trademark ponytail with these things. Maybe to imitate Bono, or to spot and dodge rotten tomatoes flying towards the stage – but that would be totally unnecessary because his performance was pretty good if not unexpectedly awesome.

Steven Seagal did a good job by surrounding himself with very capable musicians, most notably the dude playing the drums. He also brought the Fitzmaurice Twins with him on tour. These sisters sing and play guitar but on Steven’s tour, they provide the backing vocals. I think one of them was feeling ill, or the stage in Zoetermeer was too small for both, since only one of them (Sarah or Maria, I can’t tell) performed that night.

I have to say, in all honesty: that woman was one of the most beautiful women ever to grace a music stage. Perfect curves, a massive cleavage, beautiful, friendly face, sexy movements – simply a dazzling sight to behold. From time to time, she made me forget that there was some Hollywood actor (called Steve something…) performing next to her.

That may sound a little sexistic, but I am in no way ashamed to only describe her physical appearance because that is all I can describe. Because I couldn’t hear her. I did not understand a single word she was singing. That was not her fault, but the stage’s, but more on that later. 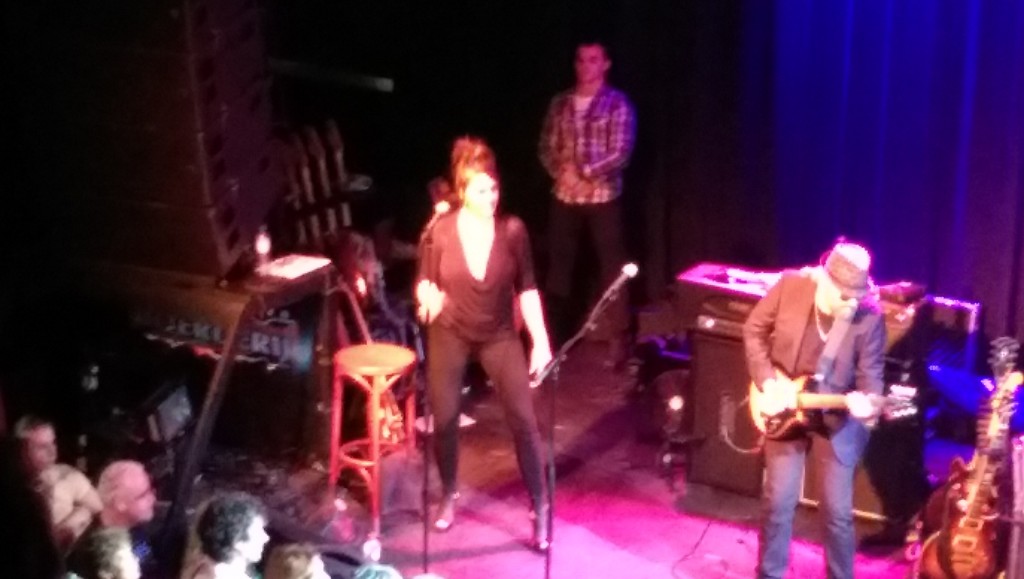 To be quite honest – I would have gone to the concert even if Steven Seagal performed gangsta rap or terror speedcore. Luckily, he plays blues music. I like that genre, but I am by no means a blues expert. In fact, I can only name one blues musician, being Gary Moore – but mainly because his most famous song actually has the word ‘blues’ in it. I appreciate almost any kind of music, especially when played live. I enjoy watching people who have mastered their profession – be it a waiter, a plumber or a musician. And the people on stage last monday definitely knew what they were doing.

The blues genre is quite forgiving and wrong notes can easily be concealed as improvisation, but in general, they were all quite good and even Steven himself managed to squeeze some solid solos out of his guitars.

Steven Seagal and his guitars

It is a known fact that Steven Seagal has a fine collection of blues guitars and for this tour, he seems to have brought all of them. The stage hand brought him a different guitar for almost every song. I don’t really see a point in that other than showing off his rare Stratocasters since I couldn’t hear any difference – but again, like the mute Fitzmaurice woman, that may have been because of the sound quality.

As said, I watched the performance from the balcony and I couldn’t make out a single word coming out of Steven Seagal’s goatee. I could hear a faint mumbling that matched the movements of his mouth – but that was it. At the time, I thought the guy behind the mixing table was an idiot, deaf, or both. But today, I found this video online (by another visitor that night) and it is clear that the sound quality was OK on the ground floor (where the mixing table was) but absolutely awful on the balcony. That is an outrage and definitely something that the Boerderij people have to improve.

Even with better sound quality, Steven Seagal would still mumble like he does in his movies – but I feel particularly sorry for Sarah (or Maria) Fitzmaurice. I could see that she put her heart and soul into her singing – but it was totally inaudible. It was almost unintentionally funny to behold. Such a shame.

In a nutshell: Steven Seagal walked on stage, played, had a little speech halfway, walked away, came back for a single-song encore and then disappeared again. All that in under 75 minutes.

From time to time, and at the end of every song, he turned his back to the audience to synchronise the last note of the song with the drummer. I learned as early as in elementary school that you should never turn your back on the audience when you’re on stage. But Steven did it anyway. He also didn’t really try to connect with the audience. A friend of mine jokingly remarked “watch, he’s gonna say good evening Amsterdam!!” (the concert was in Zoetermeer, a different, much smaller city)”. But he didn’t. He came, played and left.

Somewhere in the middle of the performance, the band paused and Steven rambled about love and respect and the freedom of religion. He called it the “theme” of his tour. I managed to catch that moment on video:

The overall feeling Steven left me with, was that he didn’t really care if he was there or not. He didn’t try to connect with the audience. Not a joke. Not a “good evening”. Nothing. And that is strange, because given the small venues he plays in, he’s clearly not playing his music for the money. He performs because he likes performing. That is why it strikes me as very odd that he didn’t seem interested in his audience at all.

Maybe Steven Seagal thought that it was enough that he was Steven Seagal. And for most of the audience, it was. But not for me.

I don’t regret going there. It was absolutely enjoyable, not only to see one of my childhood (and, admittedly, adulthood) heroes but I also enjoyed the music, played by some really great musicians. But if Steven Seagal ever wants to play in front of a sold-out football stadium, he has to improve some things. An audience is not there by accident or because they don’t have anything better to do. They are there for you, Steven. So be there for them as well. 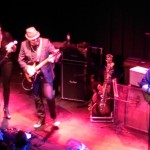 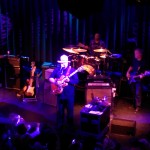 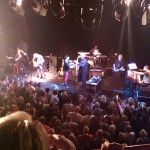 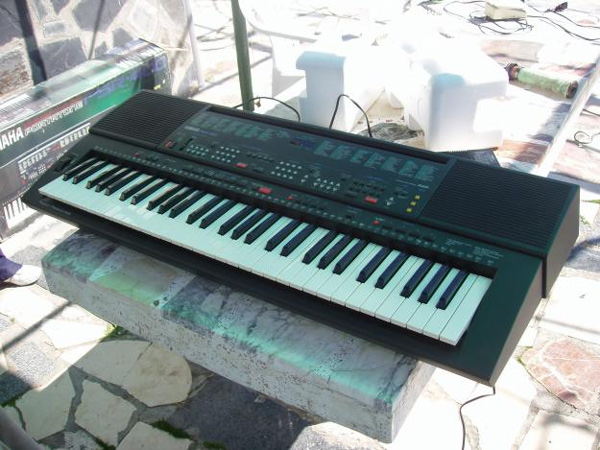 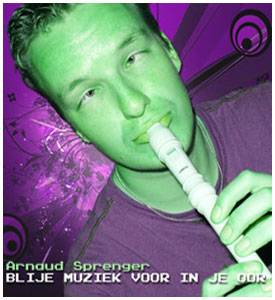